Tim Burton's Corpse Bride: An Invitation to the Wedding 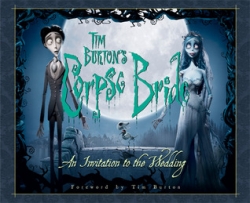 A stunning visual companion to the newest film from Tim Burton ("The Nightmare Before Christmas, Edward Scissorhands, Charlie and the Chocolate Factory"), featuring storyboards, movie stills, and Burton's own drawings.
"Corpse Bride" carries on in the dark, romantic tradition of Tim Burton's classic films "Edward Scissorhands" and "The Nightmare Before Christmas," Set in a 19th century European village, this stopmotion, animated feature follows the story of Victor (Johnny Depp), a young man who is whisked away to the underworld and wed to a mysterious Corpse Bride (Helena Bonham-Carter), while his real bride, Victoria (Emily Watson), waits bereft in the land of the living. Though life in the Land of the Dead proves to be a lot more colorful than his strict Victorian upbringing, Victor learns that there is nothing in this world, or the next, that can keep him away from his one true love. It's a tale of optimism, romance and a very lively afterlife, told in a classic Tim Burton style.
Like Tim Burton's "The Nightmare Before Christmas," this official visual companion showcases spectacular movie stills, sketches, paintings, and Tim Burton's own drawings. Covering preproduction, production, and post-production, sections detail character realization, set development and construction, puppet fabrication, costuming, and stop-motion filming. The book's final part retells the film's story in images with synopsis, storyboards, and lyrics. 140 color illustrations.