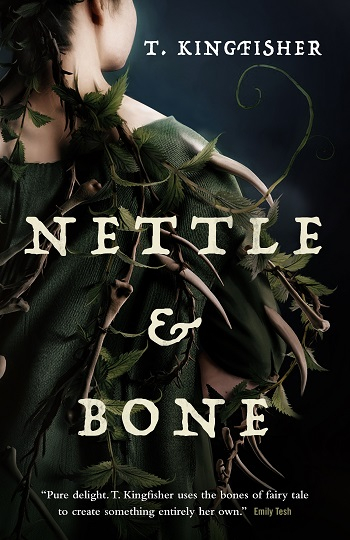 With her signature mix of the grim and the delightful, award-winning author T. Kingfisher takes the old bones of fantasy and fairytale and makes them into something entirely new in this enchanting adventure.

After years of seeing her sisters suffer at the hands of an abusive prince, Marra—the shy, convent-raised, third-born daughter—has finally realized that no one is coming to their rescue. No one, except for Marra herself.

Seeking help from a powerful gravewitch, Marra is offered the tools to kill a prince—if she can complete three impossible tasks. But, as is the way in tales of princes, witches, and daughters, the impossible is only the beginning.

On her quest, Marra is joined by the gravewitch, a reluctant fairy godmother, a strapping former knight, and a chicken possessed by a demon. Together, the five of them intend to be the hand that closes around the throat of the prince and frees Marra's family and their kingdom from its tyrannous ruler at last.

“Nettle & Bone is the kind of book that immediately feels like an old friend. Fairytale mythic resonance meets homey pragmatism in this utterly delightful story. It's creepy, funny, heartfelt, and full of fantastic characters I absolutely loved!” —Melissa Caruso, author of The Tethered Mage