The Vampire Chronicles: Interview with a Vampire, The Vampire Lestat, and The Queen of the Damned 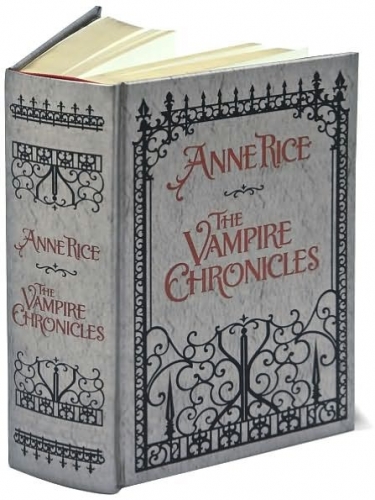 The hypnotic, deeply seductive novels of Anne Rice have captivated millions of fans around the world. It all began a quarter of a century ago with Interview with the Vampire. Now, in one chilling volume, here are the first three classic novels of The Vampire Chronicles.

In Interview with the Vampire, witness the confessions of a vampire. A novel of mesmerizing beauty and astonishing force, it is a story of danger and flight, love and loss, suspense and resolution, and the extraordinary power of the senses.

The Vampire Lestat focuses on Lestat, who was once an aristocrat from pre-revolutionary France, but now a rock star in the decadent 1980s. Lestat rushes through the centuries seeking to fathom the mystery of his existence. His is a mesmerizing story–passionate and thrilling.

The Vampire Chronicles is part of Barnes & Noble’s series of quality leatherbound volumes. Each title in the series presents a classic work in an attractively designed edition bound in genuine bonded leather. These books make elegant additions to any home library.