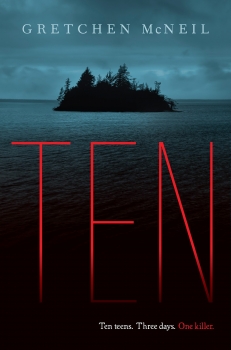 Shhhh!
Don't spread the word! Three-day weekend. House party.
White Rock House on Henry Island.
You do not want to miss it.

It was supposed to be the weekend of their lives—three days on Henry Island at an exclusive house party. Best friends Meg and Minnie each have their own reasons for wanting to be there, which involve their school's most eligible bachelor, T. J. Fletcher, and look forward to three glorious days of boys, bonding, and fun-filled luxury.

But what they expect is definitely not what they get, and what starts out as fun turns dark and twisted after the discovery of a DVD with a sinister message: Vengeance is mine.

Suddenly, people are dying, and with a storm raging outside, the teens are cut off from the rest of the world. No electricity, no phones, no internet, and a ferry that isn't scheduled to return for three days. As the deaths become more violent and the teens turn on each other, can Meg find the killer before more people die? Or is the killer closer to her than she could ever imagine?