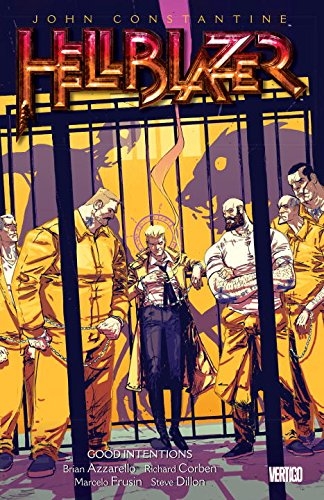 John Constantine knows the secrets of his native England like the back of his nicotine-stained hand. Unfortunately for him, he’s now a world away from that green and pleasant land.

Constantine has returned to America, and this time he’s landed in the worst place imaginable: a cell in a maximum-security prison, with a 35-year sentence for murder. Adapting to his new environs will require a steep learning curve, but the world’s greatest magician is nothing if not flexible. In fact, the question that his fellow inmates should be asking is not how this strange-talking newcomer will endure being locked up with society’s worst offenders, but rather how they are going to survive the experience.

That’s because Constantine has a few more stops to make on his stateside tour, and, unlike his cellmates, his journey begins in the joint rather than ending there. But when he arrives in the rural town of Doglick, West Virginia, to make personal amends for his crime, what he finds going on behind its closed doors shocks the famously world-weary sorcerer to his hardened, cynical core.

Acclaimed writer Brian Azzarello is joined by legendary artists Richard Corben, Marcelo Frusin and Steve Dillon for a terrifying expedition into the darkest corners of the Land of the Free in JOHN CONSTANTINE, HELLBLAZER VOL. 14: GOOD INTENTIONS, collecting issues 146-161 of the signature VERTIGO series together with the nostalgic tale “The First Time” from VERTIGO SECRET FILES: HELLBLAZER.