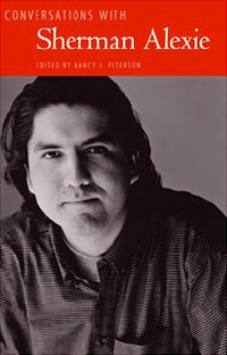 "The responsibilities of being an Indian writer are enormous. Even more so than any other group of people because we have so much more to protect."


Sherman Alexie (b. 1966) gained national attention upon release of "The Business of Fancydancing", his first collection of poems, in 1992, when a critic for the "New York Times Book Review" called him "one of the major lyric voices of our time." More recently, in 2007, Alexie won a National Book Award for "The Absolutely True Diary of a Part-Time Indian", a young adult novel based on his own high school experiences.


In "Conversations with Sherman Alexie", the writer displays the same passion, dynamic sense of humor, and sharp observational skills that characterize his work. The interviews—ranging from 1993 to 2007— feature Alexie speaking candidly about the ideas and themes behind his poetry collections ("I Would Steal Horses", "First Indian on the Moon"), short story collections ("The Lone Ranger and Tonton Fist-fight in Heaven", "Ten Little Indians"), novels ("Indian Killer", "Reservation Blues"), and screeplays ("Smoke Signals").


Nancy J. Peterson is associate professor of English and American studies at Purdue University. She is the author of "Beloved: Character Studies" and "Against Amnesia: Contemporary Women Writers and the Crises of Historical Memory").