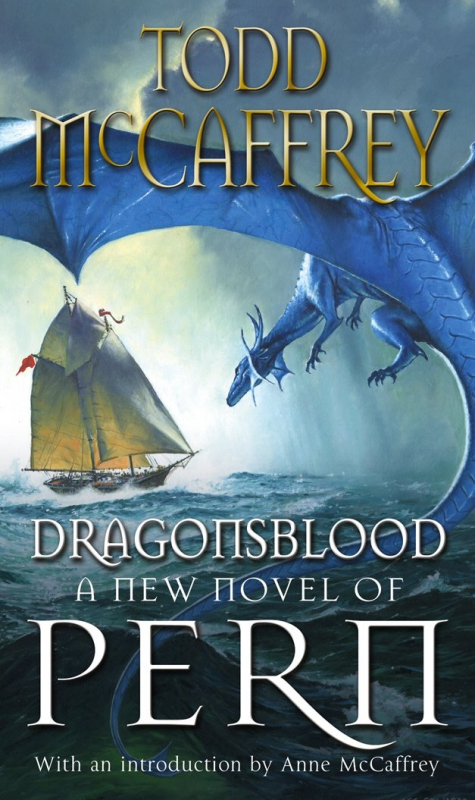 In Dragon’s Kin, bestselling author Anne McCaffrey did the unthinkable: for the first time ever, she invited another writer to join her in the skies of her most famous fictional creation. That writer was her son, Todd McCaffrey. Together, they penned a triumphant new chapter in the annals of the extraordinarily popular Dragonriders of Pern. Now, for the first time, Todd McCaffrey flies alone. And Dragonsblood is proof that the future of Pern is in good hands. After all, dragons are in his blood…

Never in the dramatic history of Pern has there been a more dire emergency than that which faces the young dragonrider Lorana. A mysterious fatal illness is striking dragons. The epidemic is spreading like wildfire…and the next deadly cycle of Threadfall is only days away. Somehow, Lorana must find a cure before the dragons–including her own beloved Arith–succumb to the sickness, leaving Pern undefended.

The lyrics of an all-but-forgotten song seem to point toward an answer from nearly five hundred years in the past, when Kitti Ping and her daughter Wind Blossom bred the first dragons from their smaller cousins, the fire-lizards. No doubt the first colonists possessed the advanced technology to find the cure for which Lorana seeks, but over the centuries, that knowledge has been lost.Or has it?

For in the distant past, an aged Wind Blossom worries that the germs that affect the fire-lizards may one day turn on larger prey–and unleash a plague that will destroy the dragons, Pern’s only defenders against Thread. But as her people struggle to survive, Wind Blossom has neither the time nor the resources to expend on a future that may never arrive–until suddenly she uncovers evidence that her worst fears will come true.

Now two brave women, separated by hundreds of years but joined by bonds transcending time, will become unknowing allies in a desperate race against sickness and Threadfall, with nothing less than the survival of all life on Pern at stake.