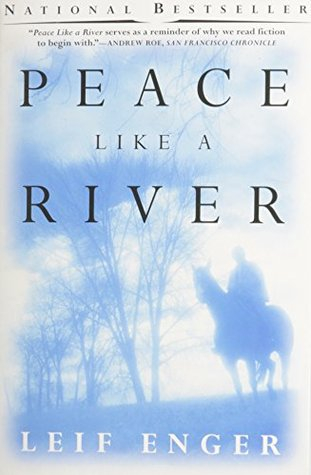 Once in a great while, we encounter a novel in our voluminous reading that begs to be read aloud. Leif Enger's debut, Peace Like a River, is one such work. His richly evocative novel, narrated by an asthmatic 11-year-old named Reuben Land, is the story of Reuben's unusual family and their journey across the frozen Badlands of the Dakotas in search of his fugitive older brother. Charged with the murder of two locals who terrorized their family, Davy has fled, understanding that the scales of justice will not weigh in his favor. But Reuben, his father, Jeremiah—a man of faith so deep he has been known to produce miracles—and Reuben's little sister, Swede, follow closely behind the fleeing Davy.

Affecting and dynamic, Peace Like a River is at once a tragedy, a romance, and an unflagging exploration into the spirituality and magic possible in the everyday world, and in that of the world awaiting us on the other side of life. In Enger's superb debut effort, we witness a wondrous celebration of family, faith, and spirit, the likes of which we haven't seen in a long, long time—and the birth of a classic work of literature.