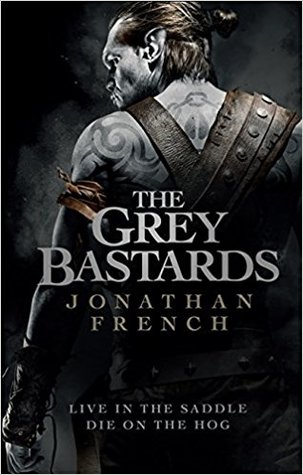 LIVE IN THE SADDLE. DIE ON THE HOG.

Such is the creed of the half-orcs dwelling in the Lot Lands. Sworn to hardened brotherhoods known as hoofs, these former slaves patrol their unforgiving country astride massive swine bred for war. They are all that stand between the decadent heart of noble Hispartha and marauding bands of full-blood orcs.

Jackal rides with the Grey Bastards, one of eight hoofs that have survived the harsh embrace of the Lots. Young, cunning and ambitious, he schemes to unseat the increasingly tyrannical founder of the Bastards, a plague-ridden warlord called the Claymaster. Supporting Jackal’s dangerous bid for leadership are Oats, a hulking mongrel with more orc than human blood, and Fetching, the only female rider in all the hoofs.

When the troubling appearance of a foreign sorcerer comes upon the heels of a faceless betrayal, Jackal’s plans are thrown into turmoil. He finds himself saddled with a captive elf girl whose very presence begins to unravel his alliances. With the anarchic blood rite of the Betrayer Moon close at hand, Jackal must decide where his loyalties truly lie, and carve out his place in a world that rewards only the vicious.