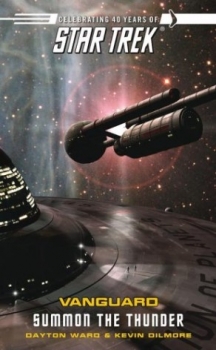 Picking up where VANGUARD: HARBINGER left off, the mystery of the Taurus Reach deepens in SUMMON THE THUNDER as a Shedai Wanderer - an very ancient and very powerful alien mind--awakens prematurely from aeons of hibernation, alerted to the encroachment upon the worlds in her care from the upstart civilizations of the Federation, the Klingons, and the Tholians. With the stakes for all sides escalating rapidly, the Shedai lashes with lethal force against the interlopers, propelling the crew of Starbase Vanguard on a desperate race to prevent all-out war.

VANGUARD chronicles the race to solve an ancient mystery having to do with a remote and unknown region of space, one that holds a highly coveted, mysterious, and potentially cataclysmic secret. At the center of this intrigue is an eclectic mix of Starfleet and civilian protagonists unlike any crew previously seen in Star Trek, whose turbulent lives aboard are painted against the backdrop of an evolving storyline as the layers of the mystery are steadily peeled back, one after another.