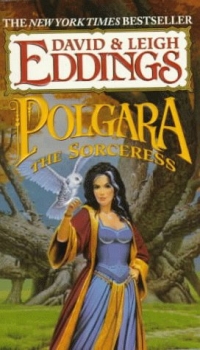 She soars above a world of warriors, kings, and priests. The daughter of Belgarath and the shape-shifter Poledra, she has fought wars, plotted palace coups, and worked her powerful magic for three thousand years. Now, Polgara looks back at her magnificent life, in this fitting crown jewel to the saga that is the Eddings' Belgariad and Mallorean cycles.

Her hair streaked white by her father's first touch, her mind guided by a mother she will not see again for centuries, Polgara begins life in her Uncle Beldin's tower, and in the prehistorical, magical Tree that stands in the middle of the Vale. There, she first learns the reaches of her powers. There she assumes the bird shapes that will serve her on her adventures. And there she starts on the path toward her destiny as Duchess of Erat, shepherdess of the cause of good, adversary of Torak the One-Eyed Dragon God, and guardian of the world's last, best hope: the heir to the Rivan throne.

Here is the legendary life story of a woman of wit, passion, and complex emotions, a woman born of two majestic parents who could not have been more unlike one another. Ordained to make peace and make war, to gain love and lose love, Polgara lives out her family's rich prophecy in the ceaseless struggle between the Light and the Dark.