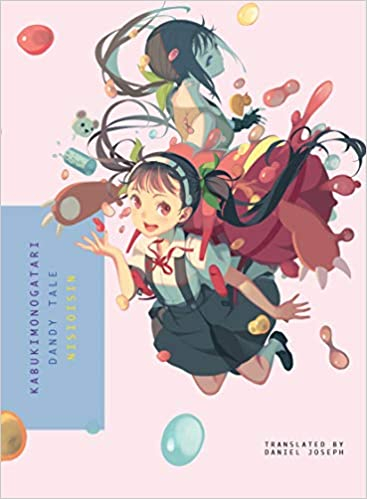 How far does one go to help a lost child? In the case of returning narrator Araragi, the answer is too far, across the veil of time. Dutifully (if unknowingly) following up on Hachikuji’s cheeky foreshadowing, he concerns himself with his young lady friend and her fate in this installment of the cult-hit series, heroically unable, once again, to find his own way home.

Thus the tale is also, or more so, about the journey itself, the dark honeymoon of a trip he takes into the past with the dweller in his shadow, Shinobu. Even among a cast that routinely disrespects chronology with their meta-commentary, she takes the cake, or the donut, by rewinding the clock for a perverse road movie, one that by and large goes nowhere, spatially.

It’s Kabuki not as in the theater, but with the character for “tilt”—as in a slanted attitude toward the world, the posture of a bohemian. Or, perhaps, of a legendary vampire who once sought death, and of a high school senior who once tuned out life doing their dandy best to attend to an embarrassing wealth of aberrations in a provincial town.