Down These Strange Streets: All-New Stories of Urban Fantasy 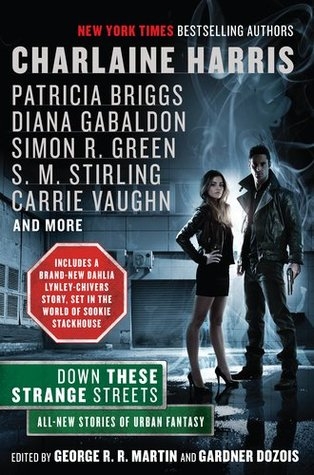 In this collection of urban fantasy stories, editors George R. R. Martin and Gardner Dozois explore the places where mystery waits at the end of every alley and where the things that go bump in the night have something to fear . . .
In “Death by Dahlia,” #1 New York Times bestselling author Charlaine Harris takes vampire Dahlia Lynley-Chivers to a lavish party that turns deadly. And with so many creatures of the night in attendance, Dahlia will have a hard time identifying the most likely suspect!

#1 New York Times bestselling author Patricia Briggs thrills in “In Red, with Pearls,” as a werewolf PI races to crack a case involving zombies, witches, and the most horrifying creatures of them all—lawyers.

In “Lord John and the Plague of Zombies,” New York Times bestselling author Diana Gabaldon follows Lord John as he journeys to the beautiful but faintly sinister island paradise of Jamaica, where he’s soon investigating a mystery with no shortage of spiders, snakes, revolutionaries, and, of course, zombies.

With these and thirteen more original tales, Down These Strange Streets takes you to the cities where fantasy and mystery collide and where private eyes who have seen it all find something lurking that is stranger still…