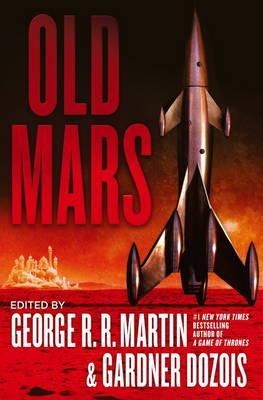 Burroughs’s A Princess of Mars. Bradbury’s The Martian Chronicles. Heinlein’s Red Planet. These and so many more inspired generations of readers with a sense that science fiction’s greatest wonders did not necessarily lie far in the future or light-years across the galaxy but were to be found right now on a nearby world tantalizingly similar to our own—a red planet that burned like an ember in our night sky . . . and in our imaginations.

This new anthology of fifteen all-original science fiction stories, edited by George R. R. Martin and Gardner Dozois, celebrates the Golden Age of Science Fiction, an era filled with tales of interplanetary colonization and derring-do. Before the advent of powerful telescopes and space probes, our solar system could be imagined as teeming with strange life-forms and ancient civilizations—by no means always friendly to the dominant species of Earth. And of all the planets orbiting that G-class star we call the Sun, none was so steeped in an aura of romantic decadence, thrilling mystery, and gung-ho adventure as Mars.

Join such seminal contributors as Michael Moorcock, Mike Resnick, Joe R. Lansdale, S. M. Stirling, Mary Rosenblum, Ian McDonald, Liz Williams, James S. A. Corey, and others in this brilliant retro anthology that turns its back on the cold, all-but-airless Mars of the Mariner probes and instead embraces an older, more welcoming, more exotic Mars: a planet of ancient canals cutting through red deserts studded with the ruined cities of dying races.

And an Introduction by George R. R. Martin!

RED PLANET BLUES (Introduction) by George R.R. Martin
MARTIAN BLOOD, by Allen M. Steele
THE UGLY DUCKLING, by Matthew Hughes
THE WRECK OF THE MARS ADVENTURE, by David D. Levine
SWORDS OF ZAR-TU-KAN, by S.M. Stirling
SHOALS, by Mary Rosenblum
IN THE TOMBS OF THE MARTIAN KINGS, by Mike Resnick
OUT OF SCARLIGHT, by Liz Williams
THE DEAD SEA-BOTTOM SCROLLS, by Howard Waldrop
A MAN WITHOUT HONOR, by James S.A. Corey
WRITTEN IN DUST, by Melinda Snodgrass
THE LOST CANAL, by Michael Moorcock
THE SUNSTONE, by Phyllis Eisenstein
KING OF THE CHEAP ROMANCE, by Joe R. Lansdale
MARINER, by Chris Roberson
THE QUEEN OF NIGHT’S ARIA, by Ian McDonald